Las Cruces police arrested a woman suspected of stabbing her ex-husband during an incident Friday morning. 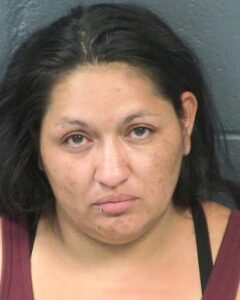 Blanca Isela Rivera Fuentes, 34, is charged with one third-degree felony count of aggravated battery against a household member. Fuentes is also charged with misdemeanor counts of resisting, evading or obstructing an officer, reckless driving and driving while license revoked.

About 4:20 a.m. Friday, May 22, Las Cruces police were dispatched to the report of a stabbing at a home on the 900 block of Montana Avenue. Officers arrived to find a man with a stab wound to his left shoulder. His injuries were not life-threatening.

The victim told police that Fuentes, his ex-wife, came to his home early Friday morning and pounded on the front door. Investigators learned the victim opened the door and Fuentes pushed her way inside. Fuentes allegedly cornered her ex-husband inside the home and used a pocketknife to threaten him. At some point, Fuentes allegedly slashed at her ex, stabbing him at least once on his shoulder.

Fuentes fled the house and left the area in her white Range Rover. Police located the vehicle near Lester Avenue and Lees Drive but she refused to stop for the officers. Fuentes led police on a brief pursuit before pulling over on Amador Avenue where she was successfully detained.

Fuentes was booked into the Dona Ana County Detention Center where she is initially being held without bond.