A situation that took place over the weekend has country music star Gretchen Wilson throwing shade at a Las Cruces hotel. According to KVIA, an employee said she did not comply with hotel rules. The manager told the dispatcher that Wilson was not playing music, she was just “being super loud.” A police spokesman confirmed officers responded at about 3:30 a.m. However, they say she left on her own. 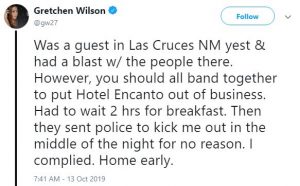